I've been wanting to get away from Wordpress for a while now. To get rid of dynamic code execution, of MySQL, of PHP, and Wordpress in particular. I finally completed that move.

The conversion to Static Site Generator Nikola took me a while, maybe I'll make time for another post with a few more details. There may still be a few rough edges, e.g. with the URL rewrite mapping. Please let me know if you notice anything broken.

I would like to apologize if any Blog Planet gets spammed by the change in feed entry IDs.

For the record, this is what the blog looked like for the past years: 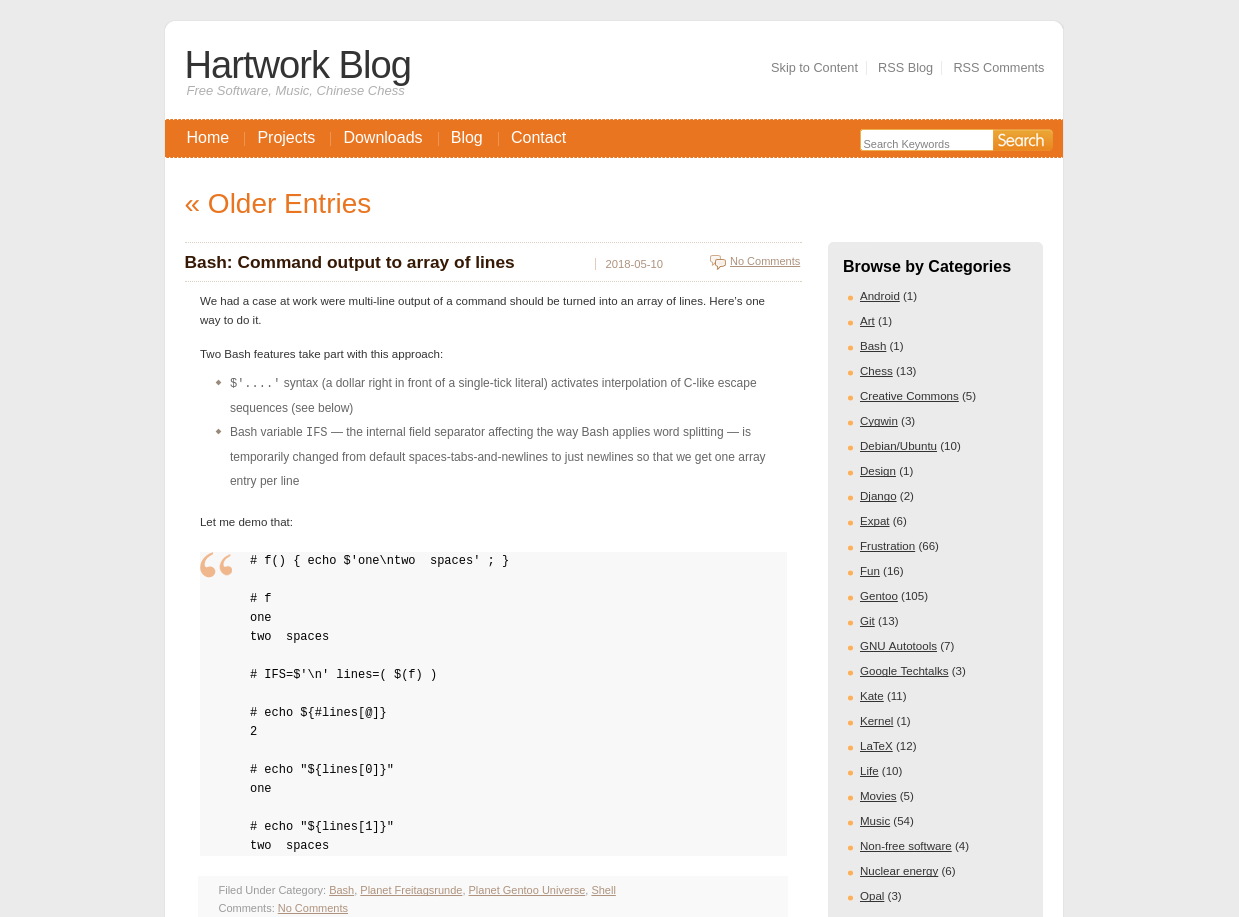 We had a case at work were multi-line output of a command should be turned into an array of lines. Here's one way to do it. Two Bash features take part with this approach:

Let me demo that:

I wanted to write this post for a while now. It's about how different IT companies are, in Berlin. I find that interesting. The examples include what I have witnessed myself, at jobs but also interviews, and also tales from friends. I will leave the implications of that diversity to you. I expect to revise this post a few times in the future. Also, splitting things into disjoint categories turned out to be difficult, so it's somewhat arbitrary. Order does not necessarily reflect importance. With that being said, these are some examples for ways in which Berlin IT companies differ :

I recently dockerized a small Django application. I build the Dockerfile in a way that the resulting image would allow running the container as if it was plain manage.py, e.g. that besides docker-compose up I could also do:

To make that work, I made this Docker entrypoint script:

Management command createcustomsuperuser is something simple that I built myself for this very purpose: Create a super user, support scripting, accept a passwords as bad as "password" or "demo" without complaints, and be okay if the user exists with the same credentials already (idempotency). I uploaded createcustomsuperuser.py as a Gist to GitHub as it's a few lines more. Back to the entrypoint script. For the RUN ./manage.py "$@" part to work, in the Dockerfile both ENTRYPOINT and CMD need to use the [..] syntax, e.g.:

For more details on ENTRYPOINT quirks like that I recommend John Zaccone's well-written article "ENTRYPOINT vs CMD: Back to Basics".

Say you have created a favicon.ico for your website and want to serve that file outside of the usual /static/images prefix, at /favicon.ico. Other favicon approaches use a code-30x redirect on HTTP level. I would rather save that extra request. Here is what I ended up with:

Probably not new but was new to me: Just ran into this Larry the Cow tattoo online: http://www.geekytattoos.com/larry-the-gender-challenged-cow/

When system-wide pip turns out too old (e.g. for lacking support for pip check), one may end up trying to update pip using a command like:

That's likely to end up with this message:

That non-error and the confusion that easily happens right after is why I'm writing this post. So let's look at the whole thing in a bit more context on a shell, a Debian jessie one in this case:

Now the interesting part is that it looks like pip would not have been updated. That impression is false : Latest pip has been installed successfully (to /usr/local/bin). One of two things is going on here: a) Unexpected Path resolution order You have /usr/bin/ before /usr/local/bin/ in $PATH, e.g. as with root of Debian jessie, so that the new pip has no chance of winning the race of path resolution for pip. For example:

b) Location hashing at shell level Your shell has hashed the old location of pip (as Bash would do) and "hides" the new version from you in the current shell session. To see that in action, we utilize Bash builtins type and hash:

So in either case you can run a recent pip from /usr/local/bin/pip right after pip install --upgrade pip, no need to resort to get-pip.py or so, in fact.

This "crazy" vulnerability in LibreOffice only came to my attention recently:

Please make sure yours peers update in time.

Some people care if software is free of cost or if it has the best features, above everything else. I don't. I care that I can legally inspect its inner workings, modify and share modified versions. That's why I happily avoid macOS, Windows, Skype, Photoshop. I ran into these two pieces involving Gentoo in the Gallery of Free Software lovers and would like to share them with you: 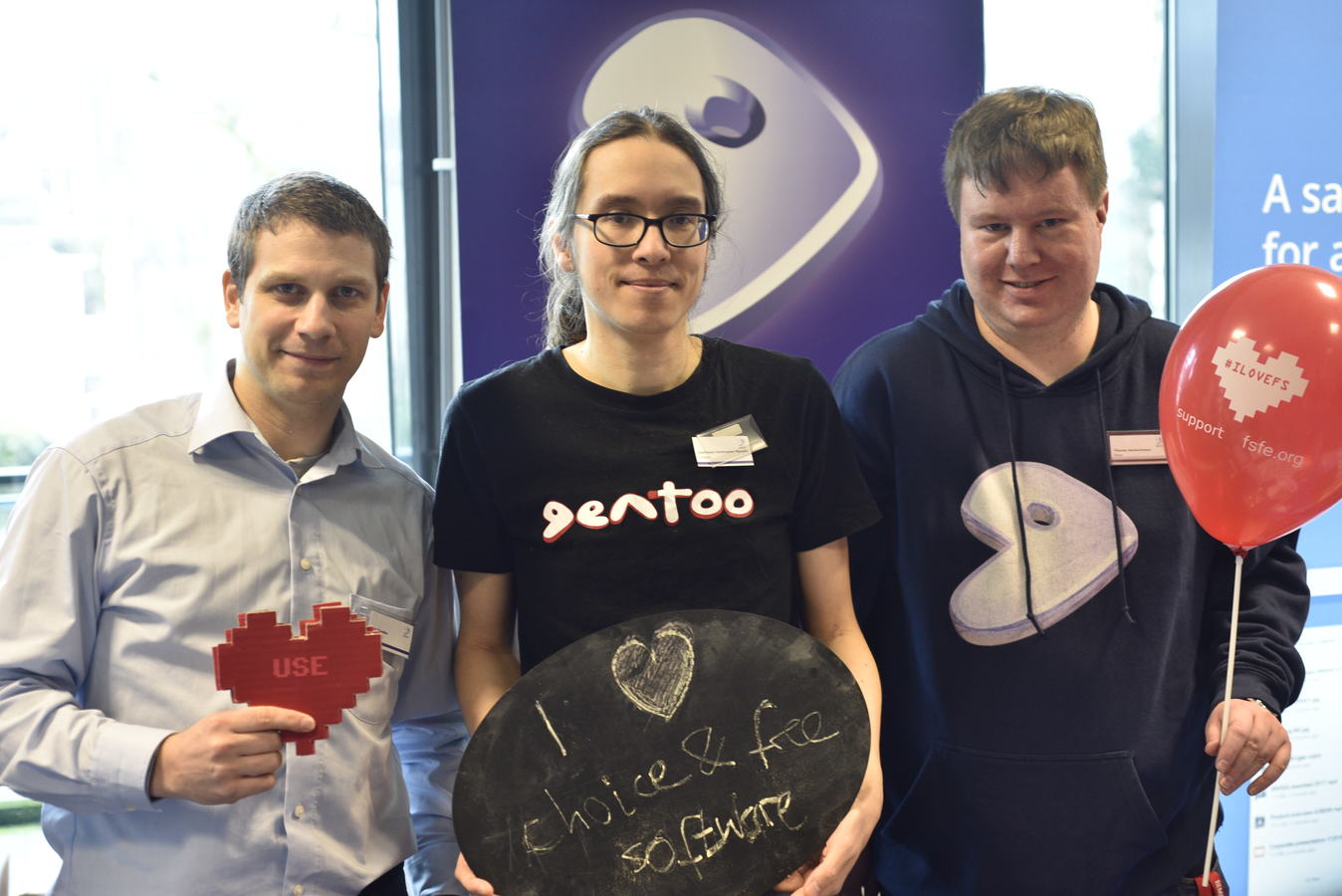 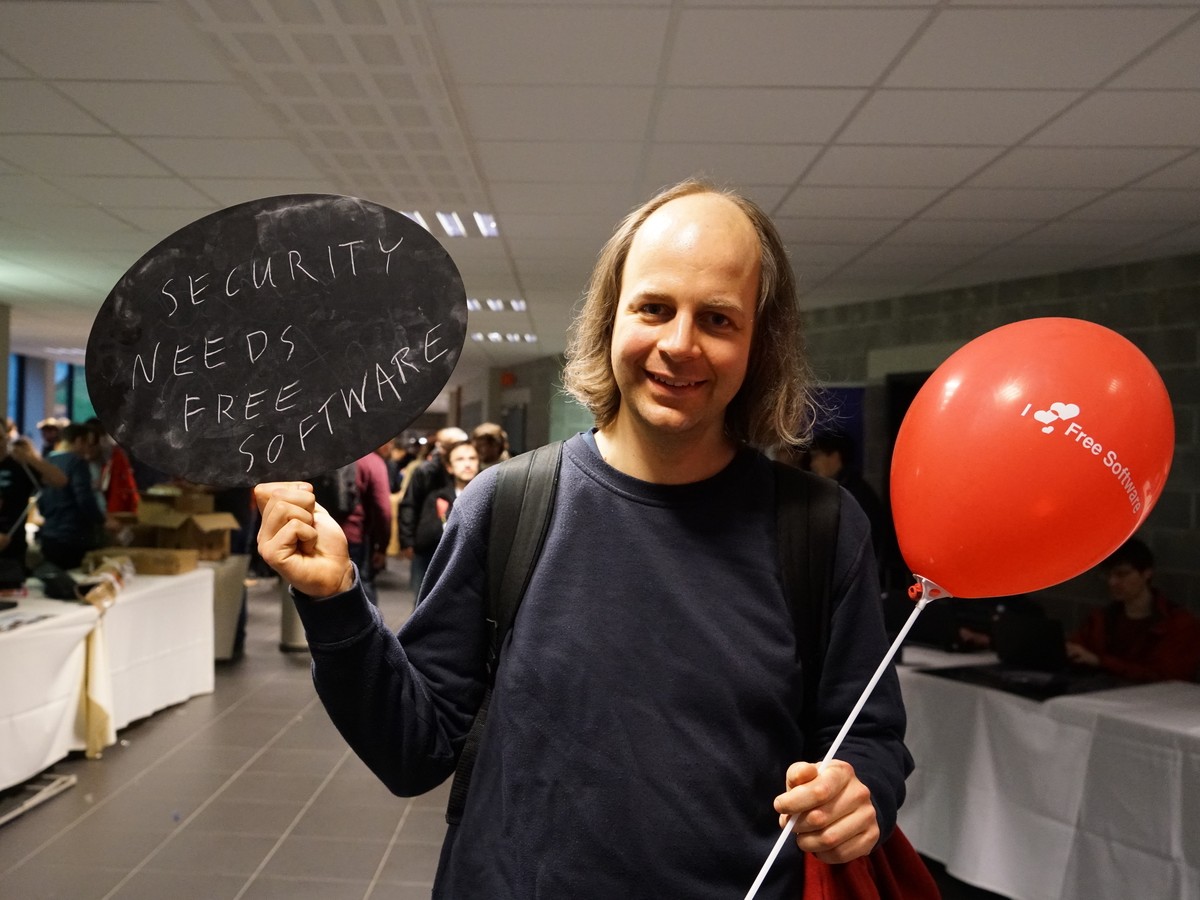 Images are licensed under CC BY-SA 4.0 (with attribution going to Free Software Foundation Europe) as confirmed by Max Mehl.

Hi! After moving uriparser from SourceForge to GitHub and re-creating its website from scratch earlier this year, today uriparser 0.8.5 has been released and is available for download. Quoting from the change log, the changes are as follows:

It would be cool if you could update any uriparser you have power to update and report any issues you run into. Thanks a bunch!