If you're buying an English book on Xiangqi do not buy "A Beginners guide to Xiangqi" by Tyler Rea: It's a ripp-off and does more harm than good. For something in English, you could go with "Chinese Chess: An Introduction to China's Ancient Game of Strategy" by H. T. Lau for print or browse www.xqinenglish.com, instead.

How did I get here?

I ran into this video on YouTube: While I've been playing Xiangqi for quite a while already, I was thinking "that book looks like fun, I'll buy it just to have a closer look, maybe there's something in there that I haven't seen yet, too". So I did have some expectations. I started skip-reading through the book and soon stumbled over error after error: to the point of laugh-or-cry. It starts with the cover page, already. Read on for details.

The book lacks declaration of an edition or a print date. It does say "Printed in Germany by Amazon Distribution GmbH, Leipzig" at the end. According to the book's Amazon page it was published at/by CreateSpace: Self Publishing and Free Distribution for Books, CD, DVD, "an Amazon company" in 2013. This beginners guide is actually a beginner's guide. Maybe that's a typo.

The cover says it loud and clear 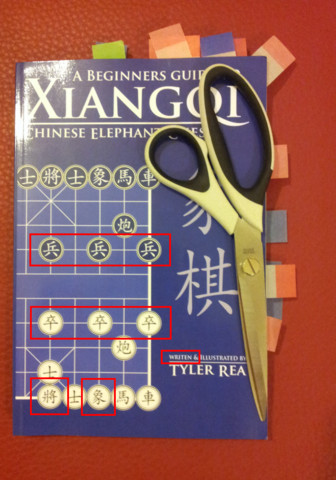 Interesting things to spot on the cover:

Too bad I noticed all of that after buying.

So far I have identified these matches with Internet content (some 1:1, some adjusted):

The author of xqinenglish.com confirmed to me via e-mail that use of his content in that book has not been authorized/licensed by him. The two places where I noticed copying first: At page 170 it reads "term use[d] on this site" rather than "in this book": 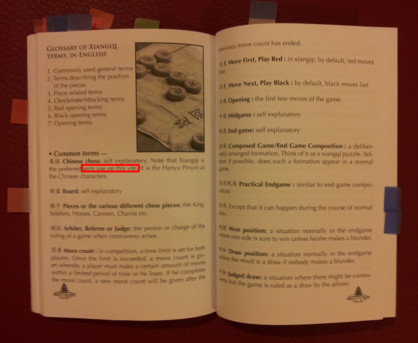 At page 49 the "Basic, commonly used tactics in Xiangqi" is not a complete sentence and does not have a full stop either. That is because in the original that is the title of a section, not a sentence. 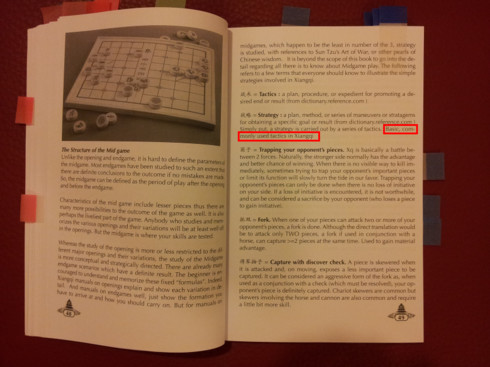 On the example games

While showing a complete game move by move could be helpful in teaching, a few things went wrong in general: 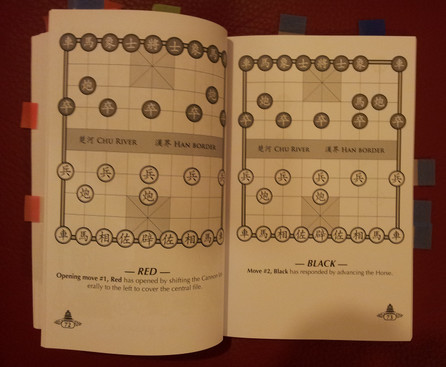 On the first game in particular: The game ends at move #79 of Red which is commented as:

WINNING Move #79, Red secures Checkmate. Black's General is it check from Red's Chariot and Red's General as part of a Face to face laughing check.

That's rather surprising since Black is not even in check after Red has moved. Is this a joke? 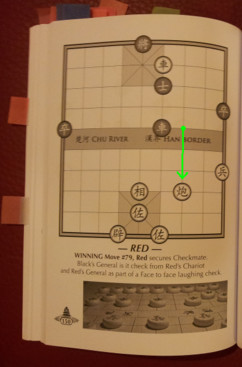 On the second game: page 167 shows the second last move of the game. Black responds with R9+2 / Ri0-i8. How does that do anything against the threat of C5=6 / Ce5-d5 by Red? What about C2=5 / Cb8-e8 for a proper reply? If we assume a really poor opponent, maybe that deserves mentioning. Also, let me use the occasion to point out the characters used for Red's king and advisors. A friend of mine who has been studying English, Chinese and German literature on Xiangqi for years said he has never seen those characters used anywhere in the context of Xiangqi. 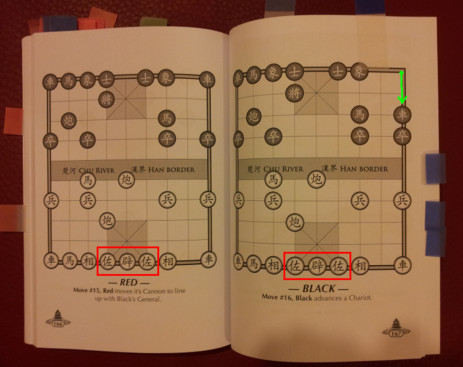 The quality of teaching

This page is meant to teach movement of the king: 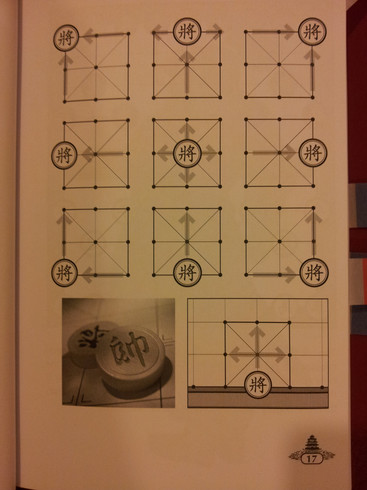 What I see is:

Up next is the oddity I noticed very first: How would the two pawns go sideways before crossing the river? 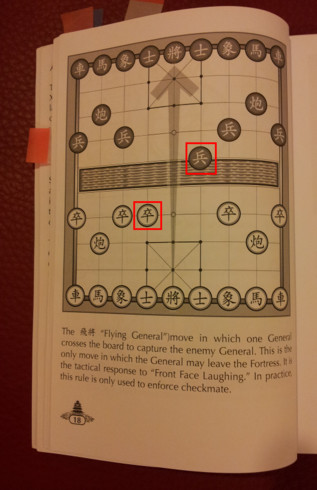 This page is meant to explain movement of the horse. With that little blocking pieces there are quite a few move options missing. 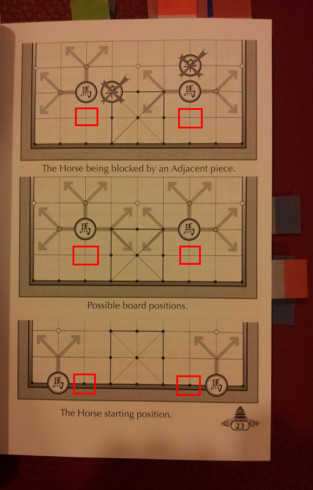 Here the idea seemed to be: show all possible steps a pawn can do. However, there are lots of arrows missing: 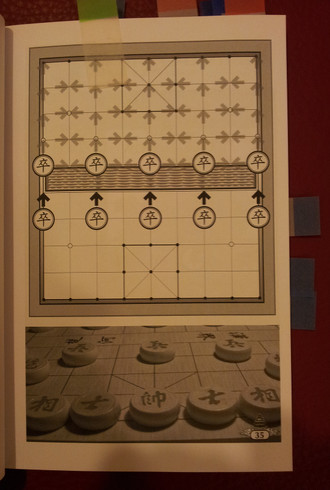 This one is really bad: If I hop my cannon right in front of the king with no protection, he eats my cannon and that's it: 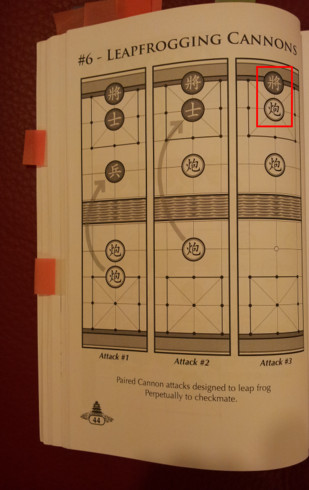 To me, this dry list of checkmates clearly lacks examples: 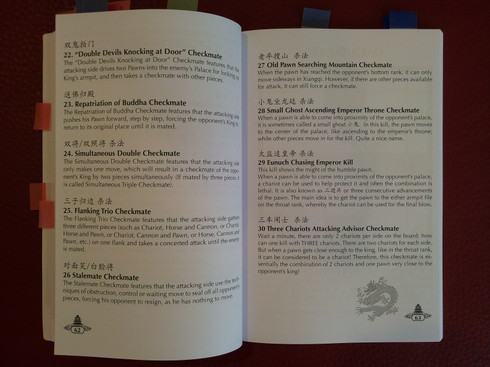 No chapter on move notation

Despite use of AXF notation in the book, there is no chapter explaining how to read or write that (or any) move notation. Why not? 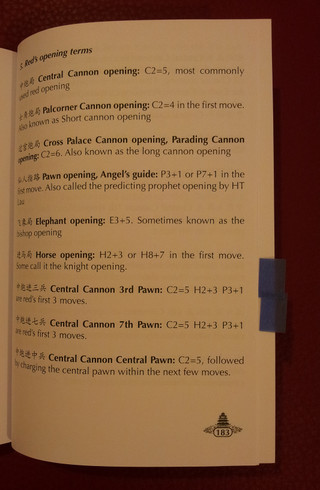 In a printed book, finding spelling mistakes is expected to be hard. Not so with this book: A few examples. On page 4 we can see how punctuation is pulled into quotes — always but once: 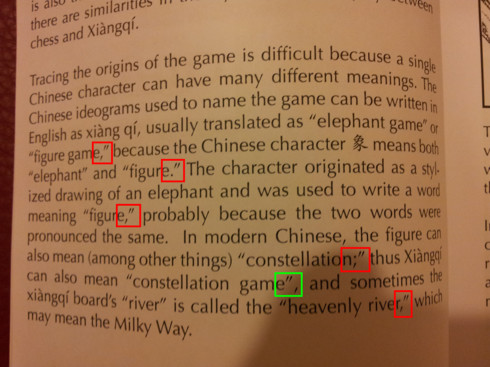 The word "Xiangqi" can be found in the book as "Xiàngqí", "Xiànqí" (typo, lacks "g") and "Xiangqi" (without accents): 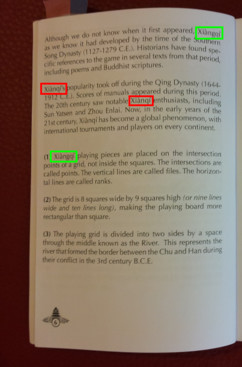 to name a few. That's all for the moment.

I just watched a TED talk that I would like to share with you. First, let me quote a line from that talk that works without much context:

Next to the technologie, entertainment and social media industries we now spend more time with other people's ideas than we do with our own.

For the remainder, see for yourself: Blur the line: Dan Jaspersen at TEDxCSU

What I wanted was a notification, something audible, looped, like an alarm clock. Either

usage would have worked for me.

I ended up grabbing the free Analog Alarm Clock sound — the low-quality MP3 version download works without registration — and this shell alias:

With this alias, now I can do stuff like

on the shell and never miss the end of test suite execution again. Do you have a different/better approach to the same problem? Let me know! PS: Yes, I have heard of continuous integration and we do that, too.

Hello :) I don't get to playing with code much lately. Yesterday and today I put some effort into trying to understand and document the EGF file format used by Xie Xie to store Xiangqi games including per-move comments and a bit of other metadata. Status quo includes a simple command line tool:

I welcome help to fill in the remaining blanks, e.g. with decoding time markers and king-in-check markers of moves. If you are on Gentoo and would like to run Xie Xie the easy way, grab games-board/xiexie-freeware-bin from the betagarden overlay. EGF files for inspection can be downloaded from http://www.cc-xiexie.com/download.php.

Since Adobe has stopped developing Flash for Firefox and Mozilla has no plans to support the Pepper plug-in API, Rinat Ibragimov is developing a wrapper to use Google Chrome's Pepper-based Flash plug-in with Mozilla Firefox:

A live ebuild is now available in the "betagarden" overlay. Users of non-stable Chrome can edit the plug-in path in /etc/freshwrapper.conf. Interestingly, freshplayerplugin makes use of my library uriparser for URI handling. Very nice!

If you happen to be in Paris during 2014-03-05 and 2014-07-21 I recommend to check out exposition "Bill Viola". It's the first exhibition with video "objects" only that I have been to. After a number of less exciting things to see, the exhibition became both interesting and relaxing at the same time. After leaving, everything I saw felt like a video installation to me...

This video gives a good overview of what to expect: Bill Viola : l'exposition

And this is (a small mid-time excerpt of) a piece that I really liked: The Encounter - Bill Viola