While waiting for my trunk to finish compiling (still waiting...) I started composing the Firefoxy incremental search bar I spoke of two days ago. Here's a shot of my current draft:

I plan to start working on the new search and replace dialog for Kate on the evening of 2007-08-08. It's actually not a dialog but a search bar showing up at the bottom of the document. I think the original concept behind this was to approach the problem that the search dialog is always in the way. (The other approach I have seen addressing this is the search dialog "intelligently" jumping around... terrible! See it live in Visual Studio 2005...) So a search bar at the bottom - I think it was Anders Lund introducing it(?) - is in my eyes a good solution to that problem.

I would love to hear some more ideas and feedback about this search bar thing. Best way to do this probably is writing to the kwrite-devel mailing list or leaving a comment right here at the blog. Please read the detailed plan before doing so. Thanks for your attention, I hope you enjoy your trip :-)

PS: Sorry for spamming you Planet KDE readers with my previous Windows-related post by mistake. I hope it was fun at least :-)

I'm shocked how much a pleasing visual style can influence my feel for and my view of Windows. Yes, that closed source Microsoft thing that I'm trying to move away from. The "Windows Classic Style" made me angry more and more and now Windows looks nice on my Computer. I'm shocked. Responsible is the Royale Noir style: 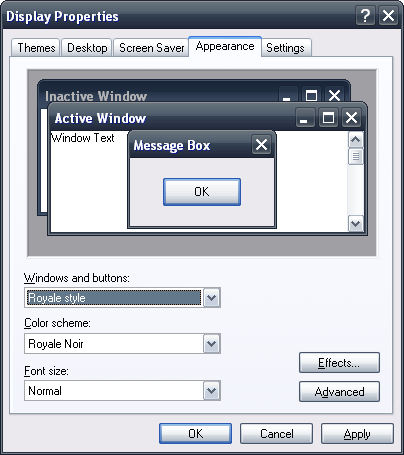 How can just a change in look suddenly make me like a closed source operating system? When I think about it I would dislike a bad look for an Open Source one as well... but I'm still surprised. Anyway: My daily work will be more fun from now on: isn't that cool.

This release comes with syntax-based normalization, two new percent-encoding functions and a few more new features. See Changelog for details. As announced for this release the old API was removed. Due to the feature additions breaking binary compatibility was inevitable.

I've been listening to almost nothing but Missy Higgins since I stumbled upon her in Silvia's blog about a week ago. Missy Higgins is a 23 years old Australian singer/songwriter that sounds a bit like the easy- listening songs of Alanis Morissette. Missy's latest album On A Clear Night is one of those few albums that I can listen to for days and not get bored or annoyed.

Some of her live recordings are even better and are shared over at etree.org. Some of her videos and her performance at Live Earth can be found on YouTube as well.

This release fixes a stupid bug in the function ToString. Sorry guys, please update if you use that function.

A few minutes before releasing uriparser 0.4.0 I once again had to replace a call to itoa with a call to sprintf because that functon is not available on Unix. No big deal - I wrote a testcase for that. Replace the call, compile, run the test suite. Too bad I commented out that testcase when debugging some code a few lines further down. The testcase could have saved me if it had not been commented out! So what happened when you called uriToString[AW] on a URI with IPv[46] part? The text was printed to stdout since I replaced itoa with plain printf instead of sprintf by mistake. Good news is there will be a new release in a few hours.

[EDIT] Did you know swprintf has different signatures on Unix and Windows?

Awesome, isn't it... cough. So if you write code for the Windows edition and make it run on Unix the formatting string's pointer will be passed as the length parameter and the parameter after that will be the formatting sting. That brought me a nice segfault. But at least there is _snwprintf on Windows with the same signature as the Unix version so we can build a preprocessor- based solution. I wish we didn't have to...

[EDIT] Seems like OpenBSD doesn't have swprintf at all...?

I created PDF versions of the Creative Commons logos so they integrate with Beamer presentations smoothly. It looks like this (click to enlarge): 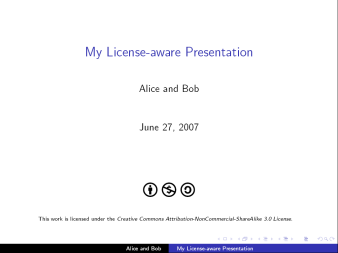 Since I'm not able to create real LaTeX packages yet, I just put the collection of commands into a normal .tex file. Usage example and its output is included. Download : ccbeamer-0.1.zip.

We had a presentation day today at university. To my suprise and joy 6 of the 9 presentations were made with LaTeX Beamer! The other three were 1x PowerDisappoint and 2x OpenOffice, the latter two in black on white completely. To me that clearly shows that people are moving away from PowerPoint, that OpenOffice needs better templates, and that Beamer spreads like a wildfire. All beamer presentations were made with different styles by the way, which is another thing I would not have expected.