Sarah Kaminsky: My father the forger

"[I]t will help the Git community a lot to understand your needs, what you like about Git, and of course what you don't like about it."

Dan Ariely: Are we in control of our own decisions?

I heard about GIMP 2.7.3 (released 2011-08-22) and its long-awaited single window mode from LWN recently. It read "[v]ersion 2.7 [..] wont hit most distro repositories for a while" quoting Linux Journal. That got me interested. Most distros? Not Gentoo: I updated the ebuild to 2.7.3 today. Once you unmask it, you can emerge it. Please report problems with it on bugs.gentoo.org as usual. Thanks! If the next weeks go well, it could get unmasked soon.

enum is available in at least Debian, Fedora and Gentoo (package app-misc/enum).

It was back in April when I first stumbled upon this Larry-based Gentoo wallpaper on deviantART. I liked it. As the entry was missing

I contacted the author Dávid Kótai about it. As a result, he started updating the font and made versions for the most common display aspect ratios: 4:3, 5:4, 8:5 (or 16:10) and 16:9. He finished that work a few days ago so I can now present it to you. 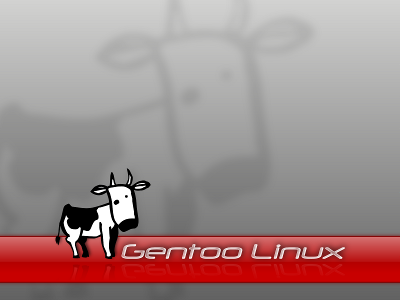 You can find PNG renderings and SVG sources (both licensed CC-BY-SA/2.5) in the wallpaper section of the Gentoo Linux website.

I buy a trash can with a foot-opener — not a cheap one. Three test kicks — it doesn't open anymore. Turns out to be manufacturing. It gets picked up — cool! — I buy a different model or another brand. That one opens smoothly but it doesn't stand flat on the floor which makes it quake when I kick the pedal. A hammer is needed to fix it — I risk voiding warranty from self-repair to save another return, waiting, digital paperwork. I buy an affordable DVD player with HDMI output to improve on the DVD playback on PC nightmare - copy protection trouble way too often. While the player is shiny and makes audio CD playback more fun than Audacious and a notebook, it plays one out of the four DVDs I feed to it. One out of four. One — Four. Besides other shortcomings. Another return. I browse through HDMI DVD players at Amazon.de: noisy drive, doesn't play half my disks, bad video quality, disks don't come all out, slow in menus, sometimes reads disks or not, playback stops somewhere in the middle of a movie, replacement unit as bad as first try, off-on needed to make disk read — all over the place, no exceptions, not just foo and bar company, but Toshiba, Sony, Philips, Panasonic, LG, Pioneer — companies that at least achieved to nail their names into my head (though Sony mostly in bad ways: rootkit audio CDs, limited rights and illegalizing a run of GNU/Linux on hardware you own, dust inside a cell phone display, dust inside a display!). My recent Amazon orders prove: the only thing I can buy that really works... is a book.