Maybe as another reminder to anyone not doing backups yet... Ironically my disc died while I was making backups. Here's a shot of what my "file system" now looks like:

For me this crash is the point to start using RAID at home.

It's been quite some time since I have been waiting for an album to hit my mailbox as with The Crash Motive's debut album "Consequence". What I have heard online is absolutely amazing and waiting sucks more than everything else. 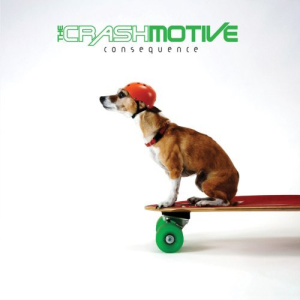 It still hasn't arrived so I have to listen to it through their Myspace page for now...

My brother sent me a link to a (German) article about an automatic cannon killing their own soldiers by mistake. I can't stop thinking how ridiculous that is — that machine was designed to kill people and now that it does people are screaming. So why I am writing this is that we - programmers, software architects, whatever we want to call ourselves - should in no way program software intended to kill people! I cannot really believe that people writing such code had to choose between that and starvation. If we broaden the topic a little I think we IT people should in general think more about the moral aspects and abusability of the code we are writing: There will be no trojans spying on us in the name of a government if we don't write them. There will be no robots shooting at us if we don't program them. We have to say "no" to that, you have to say "no" to that!

Upon my request the APG parser generator is now licensed under GPL v2 or later, instead of the previous custom license. APG's separation of grammar and code, and it's support for ABNF notation a la RFC 4234 make it very interesting and it now becomes useful to the Open Source community. Besides introducing APG here I mainly want to encourage you to request better licenses, just like you file bug reports. Because that helps and sometimes even works.

This release fixes build and packaging related issues. There is no need to upgrade if your copy of libSpiff 0.8.1 built fine for you. (This is a binary- compatible release.)

I just finished a JSON highlighter for Kate and KWrite. It comes with

The highlighter should work for KDE3 as well and can be downloaded here. 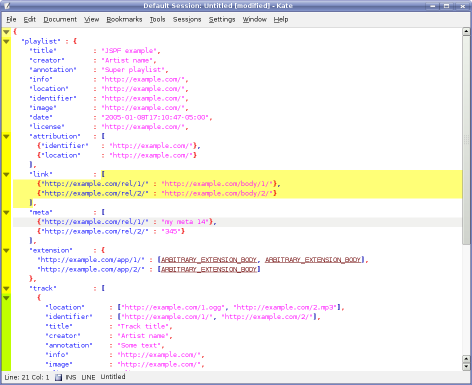 This release fixes a whitespace handling related bug. Please update your copy of libSpiff. (This is a binary-compatible release.)

Hello again! Theora, the open video format from the makers of Ogg Vorbis and other great open media formats, is in need for someone with solid understanding of x86 inline assembler in MSVC syntax. At Xiph we have people fluent with GCC-style assembly, people familiar with Windows and Visual Studio, but we don't have anybody who can write x86 assembly compilable with Visual Studio. Yes, assembly for one and the same processor can look very different from compiler to compiler. These two lines are equivalents from both worlds:

Semantics are mostly the same but even the argument order differs. So while we do have assembly code compiling with GCC, an equivalent for MSVC is missing. In general there are several possible ways to solve this code-twice problem:

Approach (1) obviously has big drawbacks like waste of time and error- proneness - it's a maintanance hell. We created base code for both (2) and (3) that proved to work for the tested (simple) subset of assembly commands. While (2) was done using a sed-based shell-script, (3) was implemented using preprocessor-macros, e.g. instead of

we could now write

and get the MSVC syntax as a "fall-out". The reason we currently cannot finish either approaches is we don't have an MSVC assembly consultant ensuring we do the right thing, which is... what we want you for! You don't need to be an expert and even can have a real life beside us... in case you want to. :-) If that sounds interesting to you please contact Timothy (tterribe) or me (sping) via mail at xiph.org directly or through the theora-dev mailing list. Btw going larger is always possible, e.g. you could extend (3) to a Bison-based assembly converter if you want to. We'll be there to your support of course. Questions? Ideas? What are you waiting for!

Thanks to the great work of Adeodato Simó both libSpiff and uriparser now have packages for Debian:

We are getting very close now to a productive search and replacing experience in Kate/KWrite. One big thing was still missing: highlighting of all matches. I finished that yesterday: 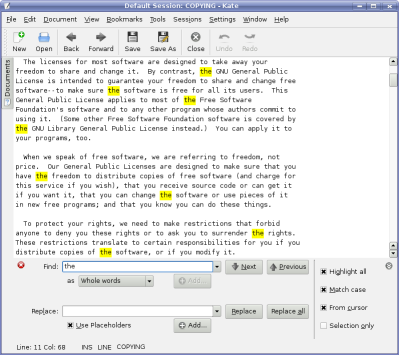 Since that feature has beast potential I would like to ask you to try it out and report any bugs you might find: Try to break it and see if it survives.